Marian got a camera so here’s some photos of my studio room.
I haven’t named it yet. I think it needs a name.

Anyway It’s been a good week.
Me and the misses are both neck deep in a ton of work.(her on Beast and me on King city)
For her it seems to work best as a strict schedule but I tend to just push my hours into the bizzare.

I’ve been reading a ton of comics too.
I got these on wednesday:

I stayed up all night to get Empowered like It star wars tickets.
And I got the Orion trade in the half price box.
Like it was 93 again, warren and shirow books.

Orion is so technicly impressive.
The action is all so stylized, everything spins.

I’d hadn’t read it in awhile–the one thing that throws me off is Shirow
seems to go out of his way to show what a bitch the main character is.
More so than his usual –Deunan or Leona hard assed lady cop.

But maybe if Shirow made more sense to me he wouldn’t be so fascinating.

Yesterday I got this comic in the mail all the way from Greece.

Such good stuff. It’s set in such a cool Shirow/Gibson future.

Here’s a page I really liked with the hotel from Neromancer:
“if it has any other name I don’t know it” 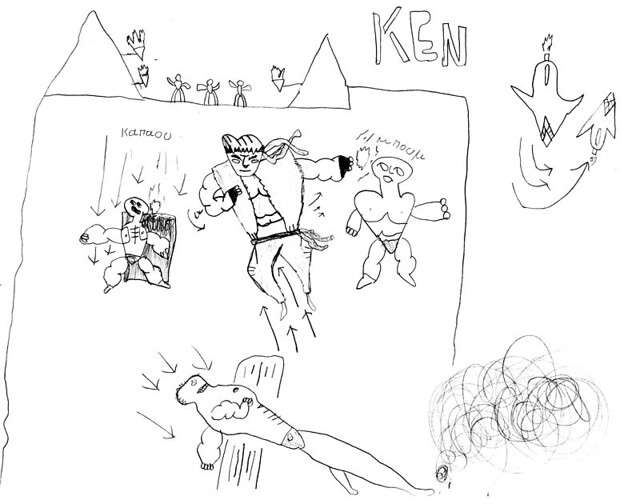 I went over to james and Marleys place last night, they got all their stuff from Seattle
finnaly. It’s weird being in their place with chair and furnature.
James loaned me his prize Chinese Aliens VS Predator comics.

They’re just Schwarzenegger running around fighting the 2 aliens.
There’s a good scene where he throws his coat and both his shoes at the Predator to escape.
“He killed the God might as well throw a chair at me”

It has great ending with the Alien queen flying off in a ship.

look at that headset “Breaker, breaker for the Bandit.”
Oh Alien queen, I can’t stay mad at you.

Heinlein is so good at coming up with future societys.
He makes the future slave owning racist canabals kind of charming.

And speaking of sci fi books-here’s these covers to the japanese SF magazine.

And this thing for Guin Saga.

I’ve never read it but I found this description:
“mysterious warrior named Guin, an amnesiac with a leopard mask magically affixed to his head. Remembering nothing but his fighting instincts and the word “Aurra”

I can tottaly relate.

I found these covers to a comic I was really into as a kid.
I love the crossed swords in the logo.

I have such a clear memory of the scene where the blonde girl unzips her post
apocalyptic exercise suit and says “If we’re going to repopulate the human race we’d better get started” damn girl.

And here’s some doraemon stuff I though was cool.

I always think of David’s descrition of asking his wife why doraemon has no ears.
“he fell asleap and mice ate them” I am never sleeping again.

Oh, also these was a printing mistake with mr James Stokoes Wonton 2
and the intro I wrote didn’t make it in. I spent 2 days on it so here it is–

And here’s a thing out of my sketchbook that I belive is an accurate depiction of
how my relationship rolls.

also here’s a thing where I almost don’t talk about comics.
http://www.strip-for-me.com/?p=1344

This entry was posted in Uncategorized and tagged aliens heinlein wonton. Bookmark the permalink.